Have you reviewed the highs and lows of 2018?

Every year brings a mix of high and low points. Hopefully, you have experienced positive outcomes in both your personal and professional lives. I’m delighted to say that that has been true for me in several ways. On the personal front, my husband John was declared free of cancer. This September was especially memorable. I was able to visit friends as well as readers of the Natalie Seachrist Hawaiian Mysteries in a visit to the city of my youth, Portland, Oregon—after an absence of more than twenty years.

MERGING OF PAST AND FUTURE
When I used to travel from Honolulu to Portland, I often planned a gathering of friends, which allowed us to catch up on one another’s lives. This was not possible on my last trip. However, each day I was able to see people who mean a great deal to me. The first evening, I saw had supper with Jerry Lesch, one of my favorite directors at the Portland Civic Theatre. We briefly met with my editor, Viki Gillespie, who was delivering marketing materials that I had shipped in advance. Although he was not aware of it, he had met Viki many years earlier during my performance in the play A Shot in the Dark, which Jerry directed. Later, her daughter had taken drama classes with him in high school.

The following morning, Viki took me on a tour of the city. I found that the trees had grown phenomenally and the city seemed much hillier than when I lived there. Later, I enjoyed dinner with my former Highland Dancing teacher, Bonnie McKenzie and her husband Colin, a renowned bagpiper and composer of classical piebroct music. My next event was passing out Hawaiian candy at my 50th high school class reunion. The following week, I gave public addresses at my high school and a combined meeting of book clubs of the American Association of University Women. What a wonderful visit to the past, while gliding more firmly into my public life as an author! 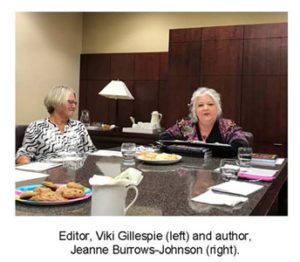